Sharon Needles
Aaron Coady (born November 28, 1981), better known by his stage name Sharon Needles, is an American drag performer and recording artist. A self-described "stupid genius, reviled sweetheart, and PBR (Pabst Blue Ribbon) princess," Needles rose to prominence on the fourth season of the Logo reality competition series RuPaul's Drag Race, where he quickly became a fan favorite and was subsequently crowned "America's Next Drag Superstar" in April 2012.  He has been candid in discussing his childhood years growing up in Iowa as a difficult time when he faced anti-gay and anti-"outsider" harassment, which prompted him to drop out of school before he could complete his high school education. In 2004, Needles moved to Pittsburgh, Pennsylvania, where he began working as a professional drag performer in nightclubs and various other venues with the drag troupe "The Haus of Haunt", which Needles describes as "one punk rock, messy mash up of very talented, fucked up weirdos." 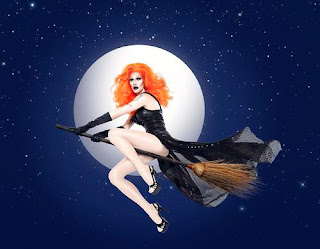 In November 2011, it was announced that Needles had been selected to compete as a contestant on the fourth season of RuPaul's Drag Race. The series premiered on January 30, 2012, and Needles was an instant stand-out for his "ghoulish" fashion sense and unconventional make-up choices. On the night of the premiere episode, Entertainment Weekly columnist Tanner Stransky hailed Needles' macabre style as "drop dead genius" and rhetorically asked "Is Sharon Needles the most 'sickening' (a drag term for  'fabulous') contestant ever?"

Throughout the fourth season of Drag Race, Needles endeared himself to audiences and became a favorite of the media, judges, and viewers alike for his quick wit, confidence, and humility, as well as for his "transgressive" aesthetic. However, Needles himself admitted that he was ambivalent in believing that he could win stating, "Being a comedic, campy, shtick queen and seeing how far those types of queens made it in past seasons, I would have been shocked if I made it past the first day."

Needles became a horror host in October 2012 when he began presenting horror and suspense films airing on the Logo network under the series title, Fearce!