On My Etsy Shop: Oya

On My Etsy Shop: Signed & Matted 5x7 Oya Art Prints $20. In Yoruba Mythology, Oya is the Undergoddess of the Niger River. She is a female warrior and the Orisha of fire, fertility, lightning, wind and magic. She creates hurricanes and tornadoes, and guards the passage to the Underworld. She is the spirit of tornadoes (which are said to be her whirling skirts as she dances), of lightning (the power of which she acquired from her husband, Chango), of earthquakes, and of any form of natural destruction. In essence, Oya is the spirit of change, of transition, and of the chaos that often brings it about. Her association with the marketplace, and more specifically with the gates of cemeteries (as opposed to the entire Underworld), emphasizes her aspect as a facilitator of transition.

Oya has been syncretized in Santeria with the Virgin of Candelaria. 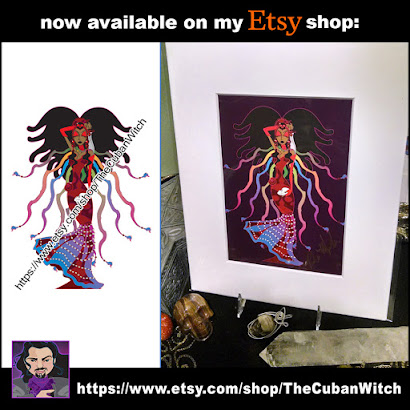