I have always proudly embraced my nertitude. Yes, "nertitude" is a word. From my early days of classic Dungeons & Dragons pen and paper role-playing games to far more MMORPGs (Massively Multiplayer Role-Playing Games) than I would ever care to mention, my geekdar has led me from one massive time and money-sinkhole to another. Yes, "geekdar" is also a word. Blizzard Entertainment is a ruthless crack dealer, and I am that poor little street whore turning trick after trick just to get one more fix. It took about five years to wrench myself free of Azeroth (and I still occasionally twitch), and while Diablo 3 does not (yet) possess the same obsessive lure for me that World of Warcraft did, I do find myself running into that all-too-familiar pattern of "Oh, OK... I'll just play for a little bit more." Poor, poor little street whore... she should have worked some other corner. 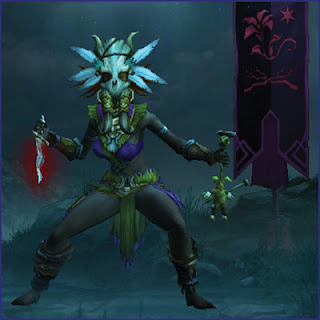 Is it really any surprise that I would be playing Diablo 3 as a Witch Doctor
(a.k.a. "The Crazy Voodoo Bitch")? 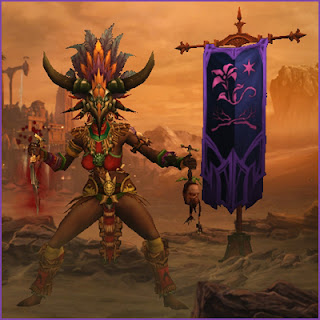 The Witch Doctor's opening sequence is one of the best in the game. I absolutely love the look and art direction of the avatars and the armor progression for this class. The creepy little shrunken heads and/or voodoo dolls they can carry, along with the crazy tribal masks they wear add a truly unexpected vibe to an otherwise very traditional fantasy setting. Just the fact that they can summon up spiders, locusts, toads and zombies throws it right into that old classic B-movie horror genre. Brilliant.

If anyone's interested...
here's my quick & dirty on the other character classes:

The Barbarian ~ The female Barbarian's avatar makes the She-hulk look anorexic. She easily towers over the other classes, as well as most of the in-game villagers and common enemies. The thunderous sound effects of this class' combat swings make even the simplest fight feel epic. 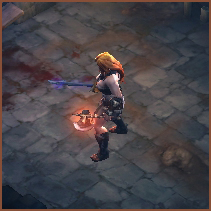 Red Sonja's been workin' out.
The Demon Hunter ~ Both the male and female avatars for this class look absolutely amazing, and very sexy. I love the gothic "Van Helsing" vibe this class possessed right off the get-go. Even though I've never really been a fan of playing ranged combat classes, the accompanying graphics for the Demon Hunter's skill sets are great, and made experimenting with this class a very fun little side-step. 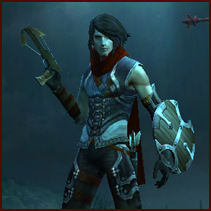 Metrosexual Demon Hunter strikes a pose. Vogue.
The Monk ~ I can't really say very much on the Monk class, unfortunately. I only gave it a brief run before deleting the character altogether. Just wasn't for me.

The Wizard ~ The design for the Wizard class, its spells and armor progression is probably one of the best in the entire game. I love that they're Asian, and their gear and garb reflect that. It's worth noting that the Wizard class in every chapter of the Diablo franchise has had a "Blizzard" spell in their arsenal... an obvious shout out to the company behind the endless tragedies that keep befalling the poor town of Tristram. 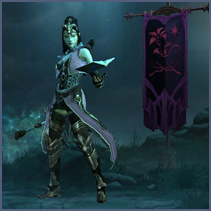