There's An App For That: Explorers of the Lost World 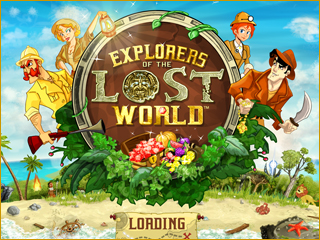 Despite the fact that we've seen its plot played out in dozens of books and movies before (not to mention Gilligan's Island! LOL), Explorers of the Lost World had a lot of charm going for it, initially. As your adventurers explore the enormous island, they slowly begin to come across different civilizations (Native, Druidic, Voodoo Cannibal, Gypsy, etc.) and try to befriend them in order to increase the size of the "Base Camp" by adding new buildings appropriate to the group you just encountered. Ok. Cute... up until I came across the Surfer... and the Cowgirl. ﻿

41st Annual New Jersey Earth Science Association Gem & Mineral Show
27-28 April 2013: Franklin, New Jersey
After a quick breakfast over at Tick Tock Diner, Brighton and I spent the better part of the early afternoon over at this year's Gem & Mineral Show. Thankfully it was a gorgeous day, because most of the booths were set up outdoors. This is actually only the second mineral show I've ever been to, but I have quickly come to understand just how overwhelming they can be. There's literally stuff everywhere. Some vendors' booths are so over-cluttered with gems and crystals that it's next to impossible to really appreciate what's for sale. Now while it's always nice to come across a truly knowledable salesman, I just "love" the ones who spew out obviously fabricated nonsense about how each and every specific crystal in their inventory was unearthed. I mean really... how many "rare one-of-a-kind finds" are going to be unexpectedly unearthed by a group of Mexican miners who were drilling for materials used to create lenses for submarine periscopes? Really? My personal favorite, however, was the guy popping pain pills and eating a chicken wing who was selling chunks of broken glass from discontinued vases. Glass. Broken glass. Chunks... of... it.

My sarcasm aside, we did manage to find a few beautiful treasures though, but spent a little bit more in the process than I had honestly expected we would. We also met up with my witchy-rific friend, TarotVision, her husband and their munchkin to exchange some very overdue hugs and smiles. Yes, "witchy-rific " is a word.

Here's a picture of (and a little info on) the Titanium Quartz Pendant I fell in love with, and absolutely had to have.

Titanium Quartz
Rainbow Titanium Quartz is the name given to natural Quartz crystals which have gone through a special treatment process. The raw crystals are cleaned, heated and placed in a vacuum chamber, where they are exposed to Titanium vapors. Titanium molecules are bonded to the Quartz by the natural electro-static charge of the crystal. The amazing colours created by this process are permanent and will neither rub off nor fade.

Supposedly, because the colours are produced by blending natural substances with a natural affinity, and not by a dye, the crystal's metaphysical properties are enhanced rather than destroyed. Rainbow Titanium Quartz is an excellent stone for creativity, both removing blockages to creativity and enhancing creative powers. An intensely visual stone, it promotes clairvoyance and all forms of "seeing". Titanium Quartz is very energizing on all levels, and can awaken all seven chakras, the energy centers of the body. It is said to increase zest and enjoyment of life, and to dispel sadness.

Because my OCD needed a distraction on Sunday morning, I decided to give all my gems and crystals (old and new) a good witchy cleansing. I also reorganized their placement around the house, making sure each room now had its own little batch of sparklies... 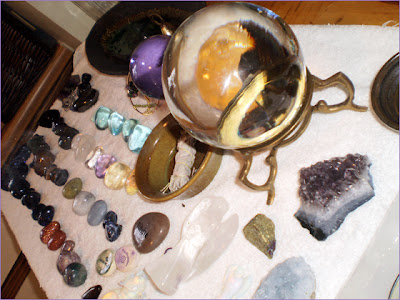 There's An App For That: Lil' Pirates

Lil' Pirates suffers from such a severe case of "Cuteness Overload" that I very nearly broke out in hives just by coming in contact with it. Surprisingly however, there's quite a lot to do in Lil' Pirates! The avatars for the captain and crew are completely customizable, as is your ship and the captain's private cabin. You can set your little pirates out on raids, have them fulfill quests, play mini pirate games, unlock new areas, upgrade your treasure for shiny trophies, engage enemy ships or even join an armada with your friends! Yay for piracy! 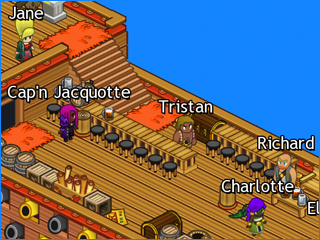 "Poor, old and haggard Jane loved Richard from afar, though she knew their love could never be, for his heart and his eyes were set on the young Charlotte, the Captain's beautiful sister. Charlotte was trusting and still so very naive about much in the world. It was beyond her comprehension that Jane could plot against her. After all, Jane had always seemed so proper and reserved... but Jane's scorned heart was a cold and heavy stone. If she could not have Richard, then neither would the lovely Charlotte. Charlotte... must die."
Posted by Roberto Mendoza No comments:
Email ThisBlogThis!Share to TwitterShare to FacebookShare to Pinterest
Labels: Apps, Game Review, Gaymer, iPad, Lil' Pirates, Pirate

There's An App For That: Infect Them All

The premise for this little gothic hack-n-slasher is very simple. You're a vampire... now go kill or convert everything you see, hence the title. Unfortunately however, despite a fairly constant varying crowd of victims (some of which can and do fight back), it just can't help but feel incredibly repetitive. That's not to say this isn't a great little distraction to sink your teeth into, though... it totally is!
Initially you only have access to one, but there are actually three different vampires to eventually choose from... each with their own set of strengths, weaknesses and unique vampire abilities (Warning: Miss Elizabeth's Vampire Bat Swarm is absolutely killer ~ >insert fingersnap<). You start the game with a basic vamper, but you can unlock the other two bloodsuckers, Elizabeth and Dracula, by going on a endless murderous rampage to raise the body count you leave in your undead wake. 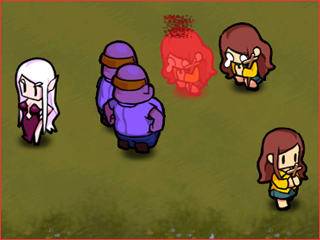 Gaea
Gaea (Gaia) or Mother Earth, was the great goddess of the early Greeks. She represented the fertile Earth and was worshiped as the omnipotent Universal Mother. In Greek mythology, she created the universe and gave birth to both the first race of gods, known as the Titans, and the first humans.
Posted by Roberto Mendoza No comments:
Email ThisBlogThis!Share to TwitterShare to FacebookShare to Pinterest
Labels: CafePress, Earth Day, Gaea, Mother Nature

I absolutely adore Jinkx Monsoon! She is now in the top three of season five's Rupual's Drag Race, and I am so very happy for her! I sincerely hope she wins the title. She's amazingly talented, and seems to be such a genuinely kind person. It would be truly wonderful to see great things happen to good people for a change. She has had such an unfair amount of absolute nonsense dumped on her by some of the other contestants, but has somehow managed to take all of it with exceptional grace.

She'll be performing live in New York on July 14th in Vaudevillans, and I was able to snag a pair of VIP tickets for my boyfriend and I before the show sold out! I'm almost embarrassed to admit, but I have never ever been to a drag show, and am beyond excited that the first one I'm going to see will be Jinxk's!

Update 4.28.13
I'm a little disappointed that the video I had originally embedded into this post is no longer available. However, I was able to find an equally fabulous replacement. The magic starts at 1:11...