On My Etsy Shop: Signed & Matted 5x7 La Virgen de la Caridad del Cobre Art Prints $20. La Virgen de la Caridad del Cobre, also known as Our Lady of Charity, is the patroness of Cuba. Her story began around 1608, when two brothers, Rodrigo and Juan de Hoyos, along with their slave, Juan Moreno, set out to the Bay of Nipe for salt. Salt was needed for the preservation of the meat at the Barajagua slaughter house, which supplied the inhabitants and workers of Santiago del Prado, now known as El Cobre. While out in the bay, a terrible storm arose, rocking their tiny boat violently with its waves. The three men prayed desperately to the Virgin Mary for her protection and deliverance. The skies suddenly cleared as if in response, and the great storm was gone. In the distance, the men saw a strange object floating in the water. They rowed towards it as the now gentle waves began to bring it closer. At first they mistook it for a bird, but it was, in actuality, a statue of the Virgin Mary holding the infant Jesus and a golden cross in her hand. The statue was fastened to a board with an inscription saying, "Yo Soy la Virgen de la Caridad" or "I am the Virgin of Charity." The statue was dressed in real cloth, had real hair and the skin tone of a multi-ethnic woman. Much to their surprise, the statue had remained completely dry while afloat in the water. 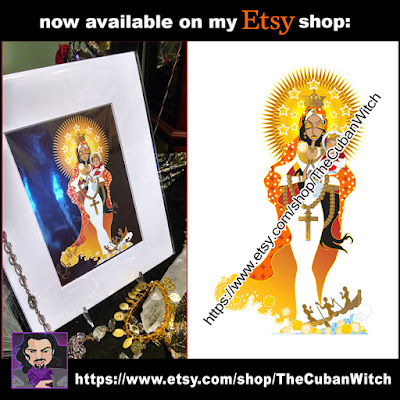