On My Etsy Shop: Eleggua

On My Etsy Shop: Signed & Matted 5x7 Eleggua Art Prints $20. In Yoruba mythology, Eleggua is the Orisha associated with the crossroads or "opening the ways". Often depicted as a child or a small man, he is a playful trickster and a brilliant strategist amongst the divinities. Worshipers often have a cement head with a metal spike in its top, and cowrie shells for eyes and a mouth, as a representation of Eleggua which receives offerings and bestows protection in return. He is the appropriator of ceremonies. No ceremony should be started without paying tribute to him first. Without Eleggua being acknowledged first, chances are the outcome desired in a ceremony will not come to full fruition. 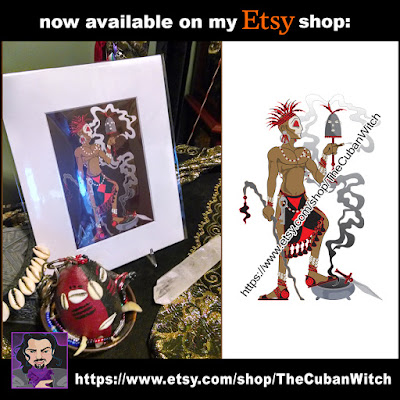