“St. Brigid of Ireland” is now available over at my #Society6 Shop: (https://society6.com/thecubanwitch) #sharemysociety6


In Celtic religion and Irish mythology, Brigit or Brighid is the daughter of the Dagda (the "All-father") and one of the Tuatha Dé Danann (a race of people thought to derive from the pre-Christian deities of Ireland). Brighid was once the divine patroness of poetry, smithing, medicine, arts and crafts, cattle and other livestock, and was associated with fire and the coming of spring. During the Middle Ages, she was syncretized with a Christian saint, and became St. Brigid of Kildare or Ireland, who is one of Ireland's patron saints along with St. Patrick and St. Columba. She is also often referred to as Mary of the Gael. Irish hagiography makes her an early Irish Christian nun, abbess, and founder of several monasteries of nuns, including that of Kildare in Ireland, which was considered legendary and was highly revered. 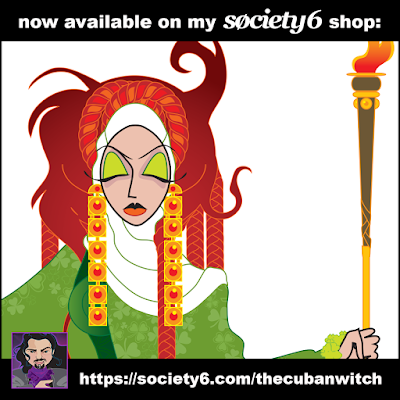